Here’s one thing you might not know about me. Even though I am a Pisces, I don’t love swimming. However, I’m a sucker for a great water ritual (talk to me about Mikveh any day). Tashlich, the practice of casting our sins symbolically into the water with tiny pieces of bread, has somehow never really risen to the top of my list (note the bread pun). Traditionally done on the second day of a Rosh Hashanah- although available to do any day in the 10 days of repentance between Rosh Hashanah and Yom Kippur- The Soul Center wanted to put a little spin on this tradition. We joined with our partners Bmore SUP (Stand Up Paddle Board) for an exploration of tashlich through paddling out in the Bay.  After some initial wobbles and waves, we each attached an anchor and a tiny Ziploc bag of pita onto our boards and headed out. Together, each on our own boards, we went through about 15 minutes of yoga heart-opener stretches, and then we were ready to do tashlich, led by Rabbi Ben Shalva.

Rabbi Shalva explained to us that the Tashlich ceremony, in various times throughout Jewish history was actually considered forbidden or taboo likely because of its strange and unusual physical manifestation. Throwing bread into the water so that the fish can eat away your sins just seems a little too magical, perhaps.

Rabbi Shalva went on to explain to us that the Hebrew word for sin is “cheit”. Instead of translating the word as sin, cheit is actually better described as “missing the mark“. Just as if you were aiming to shoot a bow and arrow and you hit just outside the bull’s-eye. So he asked us to consider where we might have missed the mark this year. And he also suggested that that could be further extrapolated to what we are feeding or continuing to allow to live within us that actually is no longer serving us. So rather than just throw the bread crumbs and beat yourself up about gossiping too much or judging people too harshly, he also suggested that we try to cast away perhaps elements of our own inner self that are no longer serving us. What a revelation! We paddled out to have our own private time, and, as Rabbi suggested, we spoke our “cheits” out loud, quietly, rather than just thinking them.

It was, for me, a tashlich unlike any other year. Felt just about right, for a year that has been so unprecedented in so many ways. Yesterday the water helped us let go.

Have a meaningful fast everyone- 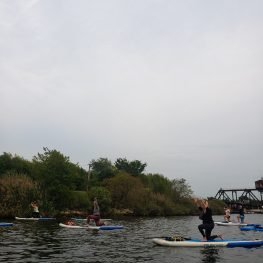 4 thoughts on “Who by Water”

Hot takes on the Parsha